To share your memory on the wall of Leslie Farago, sign in using one of the following options:

Print
FARAGO: Leslie A.
June 9, 1926 – January 17, 2021
The death of Leslie Farago, age 94 yrs., occurred peacefully at Manitou Lodge Watrous Health District Complex on Sunday January 17, 2021.
Leslie was born June 9, 1926 to Mary and... Read More
FARAGO: Leslie A.
June 9, 1926 – January 17, 2021
The death of Leslie Farago, age 94 yrs., occurred peacefully at Manitou Lodge Watrous Health District Complex on Sunday January 17, 2021.
Leslie was born June 9, 1926 to Mary and John P. Farago and grew up on the family farm south of Plunkett. He related many stories of hard work on the farm during his childhood including stooking at harvest time for his dad and neighboring farms. With his sense of humor there were many good times as well, like selling gopher tails to the government for a price. He got the bright idea to take only the tails and release the gopher hoping it would grow another. Les attended Eltham School where he became an avid baseball fan. He played ball with the Plunkett ball team and became quite an accomplished player, hitting many a home run as their pinch hitter. He was even scouted by the Brooklyn Dodgers and offered a position on the team. Les however declined, choosing Edna instead and they were married on July17, 1952 where he continued to farm with his dad. They soon started a family of three daughters. Donita, Darlene, and Lorna.
John P. Farago and Leslie were well known in the district and beyond for their extensive collection of Indian Artifacts that were found on their own farm land. Several experts including archaeologists, anthropologists, and geologists have declared the collection one of the finest they have ever seen in or out of museums. In 1968 Les bought the family farm when his parents retired to Watrous. He was always happy on the farm, enjoyed the outdoors and all of nature. He would often stop to listen to the birds, watch a deer in the bush or just sit outside watching the lightning in the distance on a summer’s night. He was a great friend and neighbor, sold crop insurance, hunting licenses and rock pickers as well as welding for a friend in need. He worked with great pride as a Resource Officer for the Dept. Of Natural Resources from 1953 to 1980. He retired from the farm moving to Watrous in 1974 where he worked at Manitou Beach Regional Park from 1974 to
the mid 80's when he was forced to retire due to an injury. Many of the trees you see in the campground today were planted by Les during that time. After retirement there was no shortage of hobbies to keep him occupied. Les took great joy in his yard and garden and in his shop wood working, making children’s toys and various tools. But the highlight of his day was meeting friends for coffee.
Les always took pride in a job well done but his greatest pride was his family. He was generous to a fault with whatever he could give be it garden produce, babysitting, sleep overs or camping trips with the Grandkids. We always went home with a care package after a visit. But he was most generous with his time and he could fix anything. Just ask the Grandkids who frequently said Grandpa (Bomper) will fix it, even if it was a precious toy run over by a tractor. He fixed it always, just couldn't bear to disappoint a child. We will always love him and miss him for the generous person he was. It gives us comfort to know he is now reunited with his beloved little dog Chloe.
Memories will be cherished by his loving wife of 68 years Edna, his brother in law Lyle Leyh who was like a brother to him, and daughters Donita (Ken) Schaffel, Darlene (Garnet) Martin, and Lorna (Brad) Habermehl. Grandchildren Mark (Tammy) Schaffel, Dallas (Candace) Schaffel, Lesley (Matt) Kelly, Derek Martin, Lindsay Martin, Kim (Warren) Harding and Kris Habermehl. Great grandchildren Jayden, Devin and Rylie Schaffel, Ariana and Kieron Schaffel, Jennings and Copeland Kelly, Danyka and Jaslyn Martin, Emily and Hailey Harding.
Leslie was predeceased by his parents Mary and John P Farago, infant sister Eva, brother John Farago and sister in law Leona, and sister Agnes Leyh.
Due to Covid-19 restrictions a graveside service will be held at Watrous Cemetery for immediate family at a later date. Donations in Leslie's memory can be made to the Activity Dept. of Manitou Lodge Watrous Health District Complex.
For online condolences, tributes or memorial donations please visit https://fotheringham-mcdougall.com/
Read Less

To plant a memorial tree in honor of Leslie Farago, please visit our Heartfelt Sympathies Store.

There are no events scheduled. You can still show your support by sending flowers directly to the family, or planting a memorial tree in memory of Leslie Farago.
Plant a Tree

We encourage you to share your most beloved memories of Leslie Farago here, so that the family and other loved ones can always see it. You can upload cherished photographs, or share your favorite stories, and can even comment on those shared by others.

3 trees were planted in the memory of Leslie Farago

Posted Jan 31, 2021 at 01:33pm
sincere sympathy go out to Edna ,my late husband Stan( your cousin) and I enjoyed so much visiting with you and Les. Stan thought so much of Les and you We remember Les' s sense of humor and jokes he loved to pull . To Donita ,Darlene Lorna and families my sympathy goes out to you as well. There will always be a emptiness in your life, just like our feels for Stan but we must remember the good times. God Bless. from Anne Kienlen (Edmonton)
Comment Share
Share via:
GC

Posted Jan 27, 2021 at 10:08am
Brad, Lorna, and family,
The memories shared of your dad described quite the guy.
Our thoughts and prayers are with you at this time of loss.
Gordon and Shirley

Posted Jan 25, 2021 at 02:48pm
We the children of Wilfred & Pearl Kienlen send our thoughts on the passing of Leslie - especially our cousin Edna and her daughters. We fondly remember many good visits at the family homestead near Burr. We had some nice visits to Watrous - we were amazed as non-swimmers we could float. Leslie always had a smile and usually a "prank or joke". Edna and he were role models for "doing everything together". He lived a long full life - may he find new paths and new treasures.
Comment Share
Share via:
JA 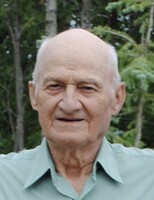