To share your memory on the wall of Garnet Martin, sign in using one of the following options:

Print
It is with heavy hearts that we share the passing of Garnet Wayne Martin on July 5, 2021, at the age of 64 at the Watrous District Health Complex after a hard fought battle with cancer.

Garnet was born on May 1, 1957 in Watrous, Sas... Read More
It is with heavy hearts that we share the passing of Garnet Wayne Martin on July 5, 2021, at the age of 64 at the Watrous District Health Complex after a hard fought battle with cancer.

Garnet was born on May 1, 1957 in Watrous, Saskatchewan and was the youngest child of Robert and Helen Martin. He grew up on the family farm south of Renown. During Garnet’s early years, his passion was sports, primarily hockey and baseball. He excelled at hockey which led him to play with the Watson Fighting Saints, the Regina Silver Foxes, and later with the Watrous Warriors and Winterhawks. Garnet moved back to Watrous to farm alongside his dad and marry his highschool sweetheart, Darlene Farago. They were married 43 years, raised three children and adored their four grandchildren.

Community was very important to Garnet and he often shared the quote “Give to your community and your community will give back to you.” He was part of Watrous Kinsmen and K-40 for numerous years in various positions, led many community initiatives around town and enjoyed coaching hockey, curling and softball, mentoring youth and travelling the country cheering on his children as they played sports. Coaching instilled many lessons in return that he would carry on in farming and life.

Garnet farmed with his dad where they raised cows and hogs, grew wheat and barley and summerfallowed. Garnet expanded his role on the farm when his dad purchased the International dealership in town in 1975. Darlene and Garnet moved out to the farm in 1980 and made that their home until they moved to town in 2018. Throughout the eighties and nineties, Garnet grew the farm through a few expansions and transitioned the farm to focus solely on grain.

Garnet was a traditional man in the sense that a handshake sealed the deal and valued honesty, fairness and hard work. On the other hand, he was forward thinking with a future mindset, a leader and visionary within the agriculture community. After going through some harder times in farming in the nineties, Garnet knew that if the farm were to be successful, he had to change how he farmed and focus on things that were within his control. He started to introduce different types of crops into his rotation and moved to direct seeding and continuous cropping to preserve the land. He rolled up his sleeves and started to learn all there was to grain marketing, primarily self taught by attending classes, expanding his network and studying the markets. He focused on the business, management and marketing side of farming as well as built strong relationships in agriculture which led to many exciting and unique opportunities.

He was one of the firsts in Western Canada to pursue using retired Saskatchewan Wheat Pool elevators as producer-car loading facilities and brought together a diverse team of like-minded individuals to purchase the Watrous grain elevator. They built a successful business that would later be sold to Canada Malt. Through his networking, he met a scientist that gave him an idea of creating a value-add snack food product, made of barley directly from the farm. With the help of his eldest daughter, Lesley, they created a snack food business called Martin Munchies that was sold throughout Western Canada and caught the eye and taste buds of media, food influencers and retail executives. Known for his grain marketing skills and expertise, Garnet joined AgriTrend to help expand their marketing business in Western Canada and in 2018, moved on to help grow Exceed Marketing where he was a Sr. Marketing Coach until his passing. He loved talking about the markets, strategizing and meeting with his clients to help them with their grain marketing and farming operations. His clients became his dear friends. He also involved the farm in a peer benchmarking group that provided him a network of friends, ideas and countless support.

Continuous learning was a priority for Garnet - both for himself and to teach others. Garnet loved to mentor those within the community and instill life lessons. He valued all the things that can be learned on the farm and wanted to share these with others. Throughout the years, he invited immediate and extended family to stay on the farm and took many youth from the community under his wing. He taught many of those how to drive a truck and enjoyed giving rides on the tractor and combine. If you fell asleep on the tractor, he would tell you that you missed seeing the pink elephant. Garnet’s mentorship excelled when he led the 4th generation through the transition of the Martin Farm and with the help of an advisory team, they established culture principles and a set of cherished values that will help them in years to come.

Garnet loved his friends like they were his family. With the transition of the farm, Garnet was able to spend more precious time with friends doing the things he loved. He took his friends and family on hunting adventures, fishing to lakes around town and also on trips up north to Missinippi and Besnard. Garnet looked forward and planned for months his and Darlene’s annual winter trip with friends. With his competitive spirit, he loved watching and betting on the latest sports games and solving the world’s problems over a cup of coffee in the morning or a beverage in the evening.

Garnet shared that last summer and fall were the best times of his life. Between cancer treatments, he spent time out at the farm, drove the combine during his 46th harvest, delivered snacks to the crew, saw many friends through his daily lawn waterings with the old three tonne truck and spent much cherished and valued time with his family and grandchildren. Garnet shared that he was grateful and wouldn’t change the past two years because “Cancer gave me the gift of time with my friends and family and built some great memories.”

Many will know and remember Garnet for his contagious laugh and deep voice that could be heard amongst the crowd, as well as his bright smile, positive attitude, his passion for people and his zest for life. No matter where he was going or the time of day, he always made time for others whether it was to have a chat, share some wisdom or have some laughs.

One of Garnet’s guiding life lessons that he shared is to smile at the world and the world will smile back at you. He had an innate ability to help make people smile, laugh and feel better, even through the toughest of times. We have many cherished memories, lessons and with his legacy, that smile and his love will keep shining bright.

Garnet is predeceased by his parents, Robert and Helen Martin, his father-in-law, Leslie Farago and his nephew, Kris Habermehl.

A Celebration of Garnet's Life will take place at the Watrous Civic Centre on Wednesday, July 14th, 2021 at 1:00 p.m. A Private Family Interment will take place in Watrous Cemetery. For those so wishing donations to the Watrous Kinsmen Club, Box 374,Watrous, SK S0K 4T0 would be appreciated.
Read Less

We encourage you to share your most beloved memories of Garnet here, so that the family and other loved ones can always see it. You can upload cherished photographs, or share your favorite stories, and can even comment on those shared by others.

Posted Jul 13, 2021 at 03:59pm
Darlene & Family, we are so sorry to hear of Garnet's passing. He will be sadly missed. We remember many events spent with Darlene and Garnet, with his wide grin and great sense of humour, whether it was hockey, ball, golf, or community functions.
He was a community leader. May your hearts be healed with the many memories of loving family times together.
God's Love and Blessings to you all.
Dennis & Elaine Frey
Comment Share
Share via:
MS

Posted Jul 12, 2021 at 04:44pm
Garnet, you will always be rooted in my memories. I will never forget your laugh and how deeply you loved everyone. Sending hugs to the family! xox

Posted Jul 09, 2021 at 12:04am
Garnet was a wonderful man. My thoughts are with the entire family during this difficult time. May you all find comfort in the memories. 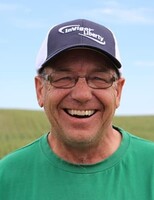