To share your memory on the wall of Abe Warkentin, sign in using one of the following options:

To plant a memorial tree in honor of Abe Warkentin, please visit our Heartfelt Sympathies Store.

We encourage you to share your most beloved memories of Abe Warkentin here, so that the family and other loved ones can always see it. You can upload cherished photographs, or share your favorite stories, and can even comment on those shared by others.

Posted Jun 15, 2021 at 09:52pm
Dear Lillian and family,
Our sincere sympathy to all of you on the loss of Abe.
Alice, Shelley and Donald Burke
Comment Share
Share via:
KV

Posted Jun 15, 2021 at 12:36pm
So sad to hear of Abe’s passing. Our sincere condolences to Lil and family. I will always remember Abe’s unique laugh and how it just made you smile! Hugs to all of you💕
Comment Share
Share via:
AS

Posted Jun 13, 2021 at 12:38am
So sorry to hear of Abe’s passing. Our condolences to you, Lil, and your family. Take care.
You are in our thoughts and prayers.
Henry and Annie (Wiebe) Schellenberg, Saskatoon
Comment Share
Share via:
SR

Posted Jun 11, 2021 at 09:00pm
Remembering Abe for his wonderful happy laugh.
So Sorry for your loss.
Sherron and Dave

Stan so enjoyed working with Abe … they laughed a lot. The girls often comment about Abe and his laugh. He was so kind to them and they thought he was such a great guy. Knowing Abe is a gift that we will cherish always and when we think of him we will tell an Abe story and smile. Our sincere sympathy Pat Stacey, Rana and Margo 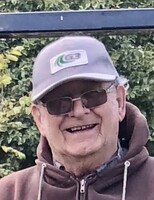