To share your memory on the wall of Julia Galvin, sign in using one of the following options:

To plant a memorial tree in honor of Julia Galvin, please visit our Heartfelt Sympathies Store.

We encourage you to share your most beloved memories of Julia Galvin here, so that the family and other loved ones can always see it. You can upload cherished photographs, or share your favorite stories, and can even comment on those shared by others.

Posted Jun 10, 2021 at 02:44pm
My condolences to you, Del , and your family.
I have so many happy memories of Auntie Julia, playing the piano with her playing the violin and singing Hungarian songs,
Her tasty Sunday meals, especially her flapper pie.
Always a birthday cake. with a dime stuck in the slice, even if it wasn't a birthday, all those Toni home perms she was so good at doing,
And many dresses and skirts she would sew for me.
She was a talented and kind lady, and we were so lucky to have her, I have many letters and cards she sent me over the years .
She had beautiful handwriting and reading her letters was like listening to her talk in her witty and humorous way.
Living so far away, the last time I saw her was in 2006 . I will always remember her that way, she served us tea and krinkles and played the violin for my niece and me.
My thoughts are with you and your family at this time.

Posted May 30, 2021 at 09:53am
My sincere condolences to Auntie Julia’s family.
I have fond memories of her from my childhood. Playing her fiddle! Making keifli,
Her soft elegance in her fur coat and hat.
She will sure add a spark when she joins the crowd waiting to meet her💖
Comment Share
Share via: 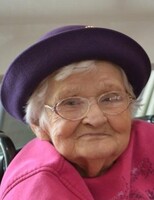