To share your memory on the wall of Verne Wilcox, sign in using one of the following options:

Print
Elmer Verne Wilcox
1940 - 2021
Verne was born on his family farm on April 22, 1940 south of Etters beach, SK. He married Doris Allan from Watrous in August 1966. They had 4 children: Carman Verne, Tyler Scott, Karla Lucille Rae (Kevin) & ... Read More
Elmer Verne Wilcox
1940 - 2021
Verne was born on his family farm on April 22, 1940 south of Etters beach, SK. He married Doris Allan from Watrous in August 1966. They had 4 children: Carman Verne, Tyler Scott, Karla Lucille Rae (Kevin) & Lisa Pauline Vance (Sheldon)…. 7 Grandchildren…. Harper Rae, Cooper Vance, Sydney Vance, Weston Wilcox, Marlon Wilcox, Sean Wilcox & Robert Wilcox. Verne has one brother Mark (Ute), sister-in-law Joan Harding (Don), brother-in-law Dwight Allan (Shirley) and several nieces and nephews. Verne was predeceased by his parents, Elmer & Lucille (Weeks) Wilcox, sisters Myrna and baby Betty Lynn Wilcox; his mother & father-in-law, Norman & Ethel Allan; brother-in-laws Paul Smorodin and Russell Allan; sister-in-law Eleanor Allan; niece Rhonda Rae (Smorodin) Elke. Verne always enjoyed his special relationship with the Gustafson Family.
Verne was born to be a farmer and began his lifelong career at the early age of 10 taking apart and putting back together everything he was interested in. He was a grain and cattle farmer. He always said that when there was a drought or poor crop coming, he would be thankful for the herd of Herefords because he knew if he hung on the cows tail it would always pull him through. When Verne was 24 he told his Mother he signed up for flying lessons at the Regina Flying Club. She wasn’t impressed but had to get used to it. He got his pilot’s license and purchased his own Cessna taildragger at the age of 25. His call letters were CF-RYS. In 1975 he purchased a Cessna 182 with call letters of CF-GPA. Some of the flying destinations Verne took us on were the Black Hills, SD (honeymoon), Phoenix, Las Vegas, Los Angeles, Montreal, Thunder Bay, Texas, Toronto and many other destinations. He had a 40-year membership with the Saskatchewan Flying Farmers where lifelong friendships were made and remain today.
He built a lighted runway and flew us to movies in Regina, always with a couple of friends in the backseat to fly home in the moonlight. We even flew 1 mile to the neighbours for a quart of cream to make ice cream just for fun!! Verne was famous for the legendary Etters Beach Peanut Drop. He would drop 50 pounds of peanuts to the delight of children and everyone who were eager to collect peanuts. It was a sad day for all when at the age of 80 he sold that plane and it flew off to Alberta.
Verne had an endless list of hobbies. He enjoyed camping, building and remodelling, inventing things like tractor cabs and an awesome display of model trains. He loved to moose hunt, fish, read, dance, and playing the saxophone in the Liberty Orchestra. He was an avid skier and would head to the mountains with a motorhome full of kids. He loved to travel by air, motorhome and by car. We went on many cruises and he always enjoyed a tour of the engine room on the ship. He also travelled to Norway twice with the Gustafson family. He loved old things much more than new. If you ever saw him in his remodelled 1963 Lincoln he would be in his glory. He was a wonderful family man who enjoyed the company of children and grandchildren. He was always impressed with their stories and accomplishments. He had many dear friends and relatives and will be missed by all. Due to COVID19 Restrictions - A Private Family Memorial Service will be held in the Imperial Community Centre on Friday, May 14, 2021. Interment in Imperial Cemetery. For online condolences, tributes or, in lieu of flowers, memorial donations to “Imperial Cemetery Arch Project” c/o Town of Imperial, Box 90, Imperial, Saskatchewan S0G 2J0 please visit: https://fotheringham-mcdougall.com/
Read Less

To plant a memorial tree in honor of Verne Wilcox, please visit our Heartfelt Sympathies Store.

We encourage you to share your most beloved memories of Verne Wilcox here, so that the family and other loved ones can always see it. You can upload cherished photographs, or share your favorite stories, and can even comment on those shared by others.

Posted May 15, 2021 at 01:21am
We have known Verne for a long time and thank him for being our friend over all the years. To put it in Tina Turner's words " You were simply the best." A truly good man and his friends and family will surely miss him. Good 'bye friend. Sympathy to all the family.
Comment Share
Share via:

My most sincere sympathy to each of you at this difficult time. Verne was a kind and thoughtful person. I will always remember my first flight ever when he invited Charles, Dwayne and I to fly to Regina with him for coffee. May all of your special memories help you through the sad days.

Doris, Carmen, Tyler, Karla, Lisa My deepest sympathy to each of you on the loss of Verne. I am sorry to hear of his passing. Prayers and hugs Tammy Wolff 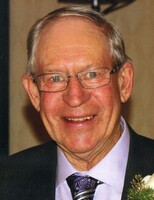